Submitted with Respect by Terry Knickerbocker

The sudden shift from in-person to online teaching required by COVID-19’s emergence last Spring disrupted education broadly. But it was especially threatening to the teaching of acting, and I felt that threat personally as the leader of an acting studio in New York City. One year later, I’ve learned that the studio is just as successful with distance-learning, which has benefits that surprised me.

I’m not saying that I don’t long for a return to in-person teaching. I do. But I now understand the benefits of teaching and studying acting online, and those benefits will be incorporated into our programming, even after the pandemic has subsided.

The prospect of teaching acting online was initially demoralizing. After all, acting is physical by nature. It’s not just the pushing and shoving or hugging and kissing; it’s the simple act of opening a door — or sitting down at a table with another person. How would so many movements that we take for granted be conveyed online?

The teaching of acting is also relational: How could we possibly duplicate the communal process of students sharing space together in the classroom. How could I, as a teacher, “read the room” — with Zoom?

I was initially very dubious that this was possible. But acting is always about truth, and we had a new truth to face.

Last Spring, our faculty, staff, and I called every one of our approximately 100 students to check in with them. We let them know that we would be attempting to transition to online learning, that we would need to improvise, but that we would give it our all and be transparent and honest throughout. We committed to trying it for a week and then assessing. While there was much doubt and fear, we only lost one student (a mother of three who needed to devote herself to her family.) After a week, it was clear that online training was working, and we haven’t looked back.

What we learned together is that there are advantages to studying acting online. Some of them are not only surprising but counterintuitive. I thought, for instance, that two actors could never experience each other as intensely online as they could in person, but I learned that close-ups are even clearer online. Despite the physical distance between actors, they can see each other more intimately, sense small changes of expression that they might not otherwise have noticed.

Similarly, being in a room with other students seems integral to the process of performance, but I learned that some students are better able to explore vulnerability in the “public privacy” of their own homes. Once discovered, that vulnerability can then be accessed more easily.

There are other advantages that I had never considered. When I give feedback to performing students in the studio, the observing students sitting behind me see only the back of my head. Online, they see my face, and they benefit from my instruction as much as the students on stage.

The benefits extend beyond teaching and learning as well. Our out-of-town students do not have to pay for travel and local housing if they stay at home and study online. This is especially important at a time when many of the part-time jobs that students typically hold have disappeared with the shuttering of restaurants and other businesses. Eight percent of our student body now comes from outside the United States, compared to one percent in 2019. 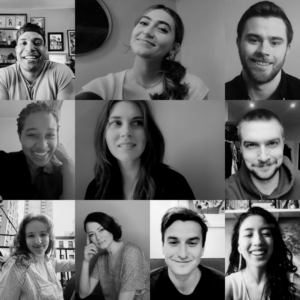 Making it easier to access our classes poses challenges, however, as well. Our studio focuses on acting not only as a skill but as a passion. There is value, therefore, in having students upend their lives and move to New York. There is also great benefit from the social interactions and shared energy of students studying in New York in person, and the serendipitous encounters that unfold.

But there are other practical realities, too. To participate in a two-year program, for instance, students from other countries must obtain a student visa. To join in a six-week summer intensive, they need only a tourist visa. In the future, we may develop a hybrid offering — with online classes interspersed with in-person intensives in New York.

There are also other ways to judge commitment. With in-person classes, there are always some students sitting in the back. Online, everyone is in the front row. I can see them all equally well.

We will probably always incorporate some element of online teaching into future courses. For now, our classes are all online, but soon we will reassess for the summer and beyond. We have learned from the pandemic, and we will not simply revert to a pre-pandemic era.

Want a chance to study with Terry?

Terry Knickerbocker Studio offers a comprehensive Two-Year Conservatory Program rooted in the Meisner technique, in a state of the art facility in Brooklyn, New York, and Online.

Fill out an Application Here

Congratulations to our Exceptional Students – Fall 2021